Points to watch out in RERA 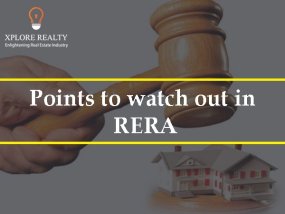 Indian realty is highly characterized by late deliveries and high rate of inventory. Data states that 25 percent of properties are delayed in India while inventory is more than 14-15 months. This laziness on the part of developers builds up a spiral where high prices chase low demand which further leads to the industrial crunch and opens up the way for illegal, unethical and unscrupulous practices in Real Estate sector. The real estate sector with more than 76,000 companies should have already had a regulatory body and a proper grievance redressal structure. While telecom sector in India with only a few major telecom players in power is under the canopy of the Telecom Regulatory Authority of India (TRAI), no such warden of the real estate sector existed until the government passed the Real Estate (Regulation and Development) Act (RERA) on November 1, 2016. Now that RERA is in force, the expectations of the sector are high. Here is what RERA has in store.

Contact us for hassle-free RERA registration of real estate projects and agents.